How do you quantify the economic impact resulting from a particular event? How has a particular business activity benefited various stakeholders within a specified area? These are important questions that can be best addressed by economic impact analysis. High Point Market Authority (HPMA), the largest home furnishings industry trade show in the world, can attest to this as a result of its work with the Duke GVC Center.

For an organization like HPMA, economic impact is critical, notes Tom Conley, President and CEO of the organization. Twice per year, the North Carolina city of High Point serves as the location for the largest home furnishings market in the world. Some 75,000 visitors flock to the city to buy, sell and market a wide variety of furniture, accessories and design services. There are numerous benefits and a few inconveniences for the inhabitants of the city (the population of High Point is 108,000). For North Carolina, the influx of people for the market results in various economic benefits, both within the furniture industry and for the state overall (despite re-structuring and declining employment in the face of globalization, the furniture industry is one of North Carolina’s traditional industrial strengths).

HPMA is funded by the state, county and city. In an era of limited public and private resources, Conley and his team were looking to work with an organization that could conduct a study to quantify the economic impact for various stakeholders. Through a connection from an employee at the Department of Commerce, Conley was introduced to the work of the Duke GVC Center.

“This individual set up a meeting for us with Duke GVC Center,” said Conley. “I was impressed, both personally and professionally, from this initial meeting as well as by evaluating the work done with other clients. The center’s affiliation with Duke established instant credibility.”

Approach and Results from Research

HPMA engaged the Duke GVC Center on an economic impact analysis, led by researcher Lukas Brun and UNC Professor William Lester. Building on the work of two previous economic impact studies, Brun and Lester used a software program to calculate the direct, indirect and induced impacts of the HMPA’s activities. The program estimates the effects of new economic activity within a study region. Data sources included a survey of market attendees, data from the HPMA and information by the NC Department of Commerce. As part of the study, they were able to estimate the financial breakdown resulting from various HPMA activities: spending by market visitors, spending by the HPMA, spending by vendors, furniture sales generated and rents paid by vendors to building owners.

The study highlighted that the High Point Market as a whole directly employs 21,461 people each year. The market contributes over $5.39 billion in economic output to the overall regional economy, which includes $1.51 billion of labor income. To put this figure in perspective, the total output of $5.39 billion is approximately equivalent to 1.3% of the total gross state product of North Carolina.

In summary, the Duke GVC Center economic impact analysis for the HPMA has “become the reference for everything that we do with respect to our public persona,” notes Conley. “We use this study to demonstrate the economic impact from the state, county and city perspectives.”

Unexpectedly, the study was a useful tool during the 2016 spring market, which generated news headlines following the passage of the HB2 law in North Carolina. The law, interpreted by many to be discriminatory against those in the LGBT community, led to several prominent players protesting their participation in the market. This had obvious consequences and ripple effects for the HPMA.

“There were some in Raleigh threatening our funding,” said Conley. “While that was politically driven, being able to talk about the economic impact in light of HB2 was very helpful. The study was used in our various lobbying efforts.”

The furniture industry has endured considerable volatility, particularly since the economic downturn of 2008. At the time of the study, the industry had not fully recovered. New housing starts (a key economic factor in evaluating the condition of the industry) in 2013 was 60% of what it had been in 2007.

“We were concerned the numbers would not be strong and not reflective,” concluded Conley. “But the study was extremely productive in showing us the complete picture. Even though the study is three years old, it continues to provide value, and the credibility of the institution and the people who did the work makes it beyond reproach.” 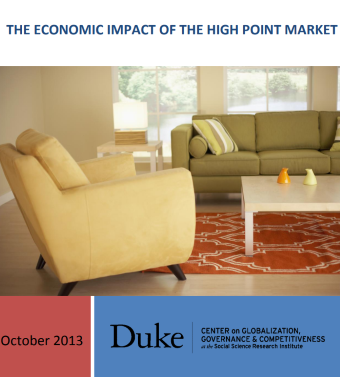 The Economic Impact of the High Point Market 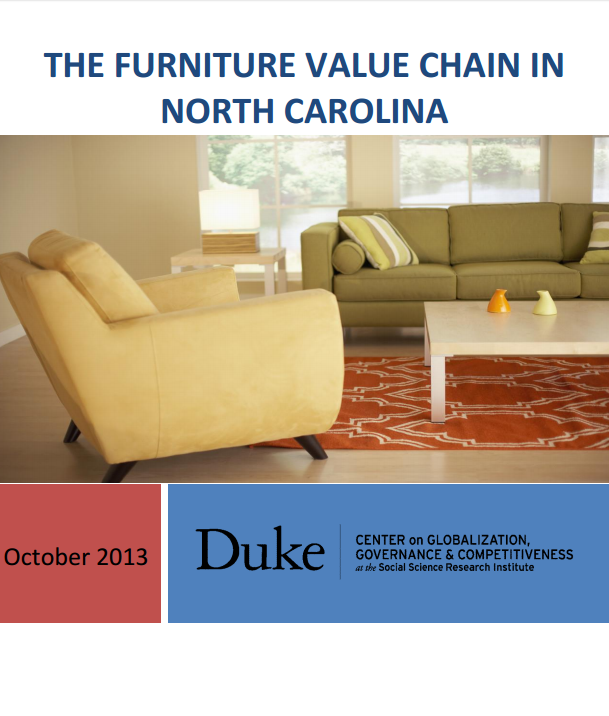